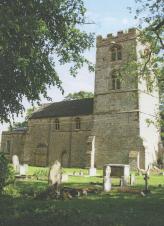 The greater part of the church as it now exists belongs to the thirteenth century period but is a development of a much earlier building, possibly the Tythe Barn, of which the South-west angle and the West window remain. The original stone building had an aisle less Nave approximately of the same size as at present. During the C13th a tower and re-modelled Chancel were added. In C15th the church was enlarged by the addition of a bell tower stage in the tower and new windows. The greater part of the building we see today is as a result of the major restoration undertaken during the incumbency of Edward Bayley at the turn of the C19th. Further restoration work was completed in the 1980s, especially to the South Porch, resulting in the present well maintained and beautiful, working church. The building is a silent spiritual witness to the living faith which has endured for centuries at the centre of the village 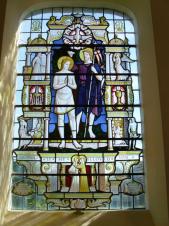 After the death in action in World War II of John Newcombe the Rector, the Revd Hopkins, proposed to the Annual Village Meeting in 1945 that he, and any other villagers killed in wars, be commemorated in the Church. The PCC agreed in September and during 1946 the glass artist Harry J Stammers of Exeter was commissioned to produce a stained glass window. This was to cost £120 with installation of £20 and to include the names of Walter Matthews and Walter Tysom killed in World War I. By early 1948 the money had been raised by donations from villagers and it was installed. On 4th July 1948, at the 7.15 p.m. Evensong service, the Archdeacon of Northampton [the Revd Cecil John Grimes] dedicated the window that became the Quinton Village War Memorial.

Although their names are etched into the East Window, the Village War Memorial, there are no details of the three villagers killed in action in the two World Wars. After much research the side window in the South Aisle is now named as the 'Soldiers' Window' and contains the photographs and histories of the men and also the Officer and three sets of brothers from Preston Deanery killed in WWI".